Preparation: For this trick you'll need two sets of cards, each with five cards. (The cards should be five different cards, but should resemble each other (for instance, if you had a Jack of spades in one, use a Jack of clubs in the other). ie SET ONE : JC,KS,KH,QS,JD. and SET TWO: JS,KC, KD,QC,JH. 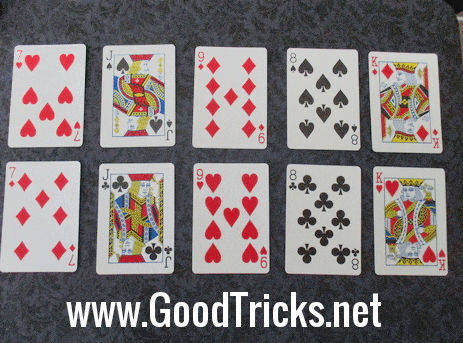 Use some play acting and appear to be concentrating deeply as if reading the spectator's thoughts. Place a finger on one of the spread ot cards and slide it out from the rest of the cards. The finishing move is up to you, either

1) Turn over the remaining four cards to show that the spectator's card has been removed.

2) Tear the card that you removed into small pieces, making sure that the spectator does not see the face up side of the torn card.

A simple trick but with a powerful finish. This trick is only as good as the performance and patter that you can use to make it entertaining.

Back To Main Magic Menu