THE EFFECT : You take an ordinary plastic drinks bottle and empty the contents. You then ask to borrow a coin from a spectator. Holding the plastic bottle in one hand and the coin in the other you slam the coin into the bottom of the bottle and then...?. Kerpow!!! The coin penetrates into the bottle.

The coin can be EASILY seen inside. There is no possible way to get it out of the bottle, the coin is too big to be removed from the bottle neck! You can give it to a spectator to examine, or they can keep it for a souvenir. Alternatively you can cut the bottle open to remove the coin! - One of the most amazing free coin tricks you can learn!


These magnets can be bought for very reasonable prices online. With regards to which size of magnets to use, I use 6mm dia x 3mm Neodymium Magnets. They are perfect for this trick and the Money Spinner Trick, in which two coins unbelievably join together then start to spin.

The secret to this very clever illusion is the magnet, which holds the coin inside the bottle, hidden behind the label.An identical coin has been previously placed in the bottle by you.

To prepare for the trick you are going to need a clear plastic drinks bottle. Empty the contents into a large glass or container, you will need it later. When the bottle is empty you need to peel back the label at the join slightly to reveal the plastic, underneath..

Then with a very sharp craft or scissors cut a small slit large enough for a two pence piece to fit through (pic 1). 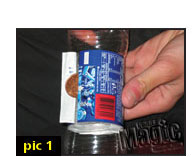 ( This is best left to an adult to do) Push a two pence piece (or any magnetic coin) into the bottle. Any coin smaller than a two pence piece is not great to use as they can fit through the neck of the bottle defeating the purpose of this impossible looking illusion.

( Depending on your countries currency, check the best size of coins to use for this trick, just make sure that they are magnetically attractive )


When the coin is in the bottle simply stick the label back together. The labels are usually quite sticky and no extra glue is required,. You may decide to glue the label back on .(pic 2) 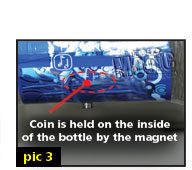 Next lay the plastic bottle on its side and position the coin in the middle of the label. Now place the magnet against the bottle to hold the coin in place there (pic 3). You should now find that because the magnet is so powerful, that you can wave the bottle around or even turn it up side down and the coin will stay in place. The final step in the bottle's preparation is to pour some of the liquid back into the bottle, just below the slit (to prevent any possible leaks).

THE METHOD : Take the modified bottle and show it to your audience, make sure the magnet is facing towards your body away from the spectators side. You can place your thumb over the magnet to hide it (pic 4). The magnet is quite small so it should not be a problem to keep it hidden from view. Remember to handle the bottle naturally as if it was just any normal bottle.

NOTE : Always show the bottle in a position where the label provides cover. Never turn it to the side (end on) or the hidden coin will be seen by the audience! 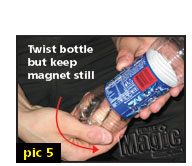 An advanced move at this stage is to twist the bottle round by its base while still holding the magnet against the bottle. This will cause the magnet and coin to stay still while the bottle turns between them (pic 5). This move the convinces the audience that they have seen all round the bottle making the trick & moves seem more natural and the effect more convincing. Practice is required for this move to look convincing.


Remove the top of the bottle and pour the liquid, making sure that the coin is above the liquid and will pass right under the coin. Pouring the liquid reinforces the fact that the bottle is empty and that it is completely ordinary. 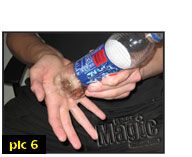 At this point in time, the spectator should be concentrating on the coin in the bottle. Take this opportunity to casually palm the spectators coin in your other hand and get rid of it discretely, into your pocket or somewhere else out of the spectators view.

When the coin drops from the magnet make sure you keep your thumb on the magnet, so it does not fall as well. If you press the magnet firmly against the bottle during the trick you should find that when you take your thumb off the bottle to hand it to the spectators to examine the magnet will stay stuck to your thumb (pic 7).

The magnet can be discarded discretely, at this point in the trick, also. To tell the truth, these magnets are so small that the chances of the spectator noticing it, are slim so do not worry to much about it being discovered.

The bottle can be handed to the spectator for inspection with confidence as the secret is well hidden . To remove all traces of evidence, the routine can be improvised on by cutting the bottle open with scissors (starting at the point in the bottle where the small slit is) and then handing the spectator back their coin.

BOTTLE TOP METHOD : This trick can also be performed, using a bottle top instead of a coin. You will need a little more preparation, as follows. You will need to find an identical bottle top , to the one on the bottle. Make it magnetically attractive by gluing a small magnetically attractive coin or metal i.e. a paperclip inside the cap ( even hide it under the small plastic insert found in some caps ). The plastic insert can then be glued back on, making the cap look completely normal.

EASIER HANDLING : You may wish to try gluing the magnet under the bottle label.

ALTERNATIVE METHOD : This trick can also be performed by a commercially available product known as a folding coin, available from good magic suppliers.