David Copperfield is one of the worlds top magicians and presents some amazing magic trick special shows for television. Here is an explanation to one of of his most spectacular illusions.

"As well as the Statue Of Liberty trick, one of David's most visually stunning tricks was when he appeared to be cut in two by a giant circular saw. His top and lower body were seen to be separated on two separate wheeled trolleys by his helpers who pushed the two trolleys apart. The two trolleys were then pushed together and David appeared to use his magic powers to turn back time and reverse the process, rewinding the giant saw action and returning him to a whole person again.

The following video by the masked magician explains the workings of this grand scale illusion along with the set up and safety precautions required for this potentially dangerous stunt.

To summarize briefly, what appeared to be David's legs and feet were actually those of another actor who switched leg positions quickly with David ( see diagram below ) as he got into the wooden chest. His loose shirt would cover a space between him and the accomplice for the saw to go between. The saw fitted into a special slot with safety guards on either side.

There are a lot of little tweaks and safety precautions built into the trick. As the saw action was reversed, the actor and David would use a brief period of distraction to swap leg and feet positions so that David could be shown complete. 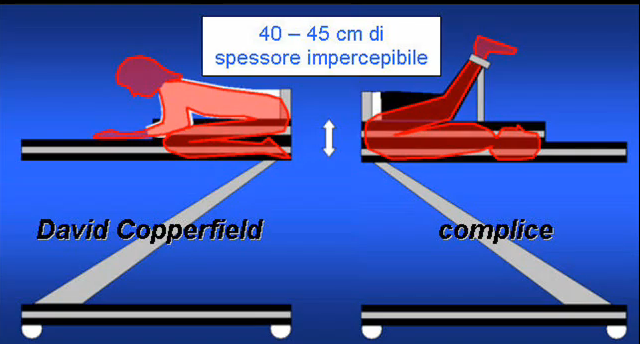