All The Aces Card Cut Trick

An easy card cut trick where the spectator cuts deck into several piles, only to find that the aces have magically risen to the top of each pile.

Preparation: Before performing this magic trick, remove the four aces from the deck and place them on the top of the deck.

Method: To begin the trick, you, the magician, ask your spectator to divide the deck into four equal piles by dropping cards off the bottom of the deck. 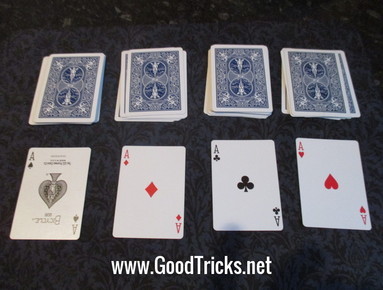